Kafka Granite has a new headquarters! After outgrowing the old office years ago, the office staff at Kafka Granite has finally made the move to a new–and much more spacious–office building. With more workspace, new technology, better organization, and room for expansion, we are more efficient than ever before! We hope that this move has a positive impact on all of our customers.

With the addition of a Peterson 6710B Track Mounted Horizontal Grinder…Kafka Granite now offers recycling services!

We are now able to grind and recycle ashpalt shingles…at a cost of only $20 per ton! This 1000hp machine is capable of grinding large volumes at very high production rates. The recycled content can be added to new asphalt mix for road construction. The shingles must be asbestos free with no tin or other debris. However, tarpaper and nails are acceptable. Are you a contractor? Special rates and terms apply! Drop your shingles at 2200 Hwy 107, Mosinee, or contact us for more details.

Is your pile too large to transport? Kafka Granite’s Peterson grinder will come to you! Large volume shingle and wood grinding services are available on your site location, anywhere throughout Wisconsin and Minnesota.

Join us in the Green Initiative! Recycle your asphalt shingles and wood debris with Kafka Granite!

In 2009 Glenn Kafka, owner of Kafka Granite and long-time snowmobile racing tuner/crew chief, teamed up with Snocross & Freestyle Rider/X-Games Gold Medalist Levi LaVallee and together started Team LaVallee. With these two snowmobile racing powerhouses at the helm the team went on to successfully be one of Polaris Industries top racing and freestyle snocross teams.   The duo, along with Pro Adaptive racer Mike Schultz, departed July 6th with a tour that is part of the Armed Forces Entertainment. The trip starts in Germany at the Wounded Warrior Wing of the Army Hospital Landstuhl. From there the guys will travel to undisclosed bases throughout the Middle East. They will place ESPN XGames Medals around the necks of the service members, have meet and greets and share stories of their success and accomplishments.
“This is a huge opportunity for me to go over and high-five the troops for all the things they do for us. It’s going to be an awesome experience!” states, LaVallee.
“These men and women are working on billion dollar aircraft in the direct sun with temp’s north of 120 degrees for hours on end, turning wrenches, checking specifications, doing everything necessary to make the planes ready to fly, it’s so damn humbling to see their greatness on display” said Kafka ” Meeting these heroes of behind the scenes work today just put into perspective the entire XHeavy Medal Tour for me, Robi Powers told me about all the work our servicemen are doing over here in extreme conditions, today I got to see it being done up close and personal” 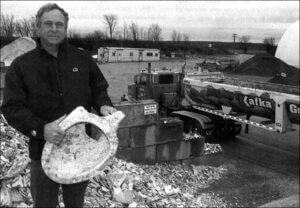 Kafka Granite is commited to providing the best customer service possible. In order to better serve our customers in the Chicagoland area, we’ve opened a rail served distribution yard in Joliet, IL. This facility is stocked with a variety of our popular landscape stone and boulders, and is also the main distribution center in the midwest for our newest offering, Norstone Natural Stone Products.

We have also entered a long term lease of the rail cars used to bring material to the Joliet distribution yard.This ensures rail car availability so that we can keep the supply of materials at the Joliet yard at the right quantities depending on the demand of the Chicago market.

For more information on the availability of any of our products, please contact our sales department:

Contact us for more information, to request a quote, or to receive free samples.