This past September, we shared a story about Betty Blume, a military mom who has been sending the comforts of home to various troops in Afghanistan. Kafka Granite has continued to cover the shipping costs of these care packages, and now Betty has asked to publicly express her gratitude in light of the holiday season. The following is a message from Betty and her husband, Larry, as well as two of the many gracious recipients currently serving in Afghanistan.

“We would like to thank Glenn and Bev Kafka of Kafka Granite for their generous support to our troops serving in Afghanistan. Their support has made it possible for us to give the troops a meaningful Thanksgiving and hopefully an enjoyable Christmas. To date we have been able to send approximately 125 care packages. We are in the spirit of the season! Happiness doesn’t result from what we get, but from what we give. Thank you for giving!” –Betty and Larry Blume

“Thank you for every single package we have received! We love you and the community that supports us!” –PFC Gage Andrews

“God Bless your family and your community as you support us. It is not in vain and we are very appreciative.” –SSG Michael Lane

Kafka Granite will continue supporting this good cause and we encourage you to join us. Please contact us if you are interested in spreading holiday cheer to our soldiers overseas! 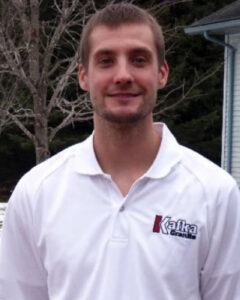 Jeremy Bores joins the sales team at Kafka Granite: Kafka Granite is proud to introduce Jeremy Bores, the newest member of our sales team. Jeremy graduated from the University of Wisconsin-Eau Claire in 2009 with major in Marketing and a minor in Information Systems. He since has gained sales experience while working for both Bauer Built Tire and Marshfield Doorsystems. Jeremy has known the Kafka family for many years and shares common values with Kafka Granite, making him a great fit for our team.

“I feel very privileged to be a part of the Kafka Granite team. I see Kafka Granite as thriving small business that will continue to exceed expectations for many years to come,” Bores commented.

Jeremy will be working primarily from our Mosinee office. You can contact him directly at jeremy@kafkagranite.com.

Welcome to the team, Jeremy!

In addition, by adding 20% IceBite (a de-sugared sugar beat molasses) to the solution, the melting process is even more efficient. With the addition of IceBite, the melting point drops significantly to well below 0 degrees. Due to IceBite‘s residual effect, the product stays on the road longer, decreasing additional applications. This product also assists in breaking the bond between the road surface and the ice/snow, making plowing easier and more efficient. Finally, this organic and environmentally friendly product is a natural corrosion inhibitor. With the addition of IceBite, corrosion is reduced by 50-60%, preventing rust on vehicles and metal in bridges.

These products are available in 4,500 gallon tankers or 250 gallon totes. Are you interested in improving the winter driving conditions of your roads? Contact John Meyer for more information.

On behalf of Kafka Granite, we would like to thank you for your continued support of our family business. We wish you a very happy holiday season and a prosperous new year. Have you seen our new billboard yet? For those of you haven’t been able to spot it while heading southbound on I-39 near exit 179, we thought you might enjoy seeing it!

Kafka Granite Partners with Eco Village: In the Spring of 2012, St. Croix Valley Habitat for Humanity broke ground on Eco Village, an energy independent, affordable housing community located in River Falls, WI. When completed, the Eco Village will have 18 units and is expected to be the largest net-zero project in the nation, meaning it will produce more energy than it consumes. With an array of environmentally friendly products, Kafka Granite has partnered with Eco Village to help create a beautiful and sustainable landscape.

Eco Village will be utilizing both Permeable Paver Grit and Standard and/or Stabilized Pathway Mix for the driveways, boulevards, sidewalks, and walking trails. The permeability of both products will significantly help Eco Village control storm water run-off, while creating a natural and aesthetically pleasing environment. Kafka Granite is excited to be a part of this efficient, ecological, state-of-the-art, and affordable community housing project. We will be following this project as it progresses, so say stay tuned for future updates!

To learn more about Eco Village, check out the St. Croix Valley Habitat for Humanity website or read this article featured in The LA Times. Want to become involved in this project? Learn how you can donate materials or volunteer your skills.

Want to learn more about Permeable Paver Grit, Standard and Stabilized Pathway Mix, or Kafka Granite‘s other environmentally friendly products for your next LEED certified project? Contact one of our knowledgable sales representatives for more information!

The teams golfed 9 holes, at local Mystique Meadows Golf Course. After receiving a multitude of generous prize donations, the employees were able to compete for shortest putt, longest drive, and other fun competitions. After the golf tournament, the entire group gathered at Edwin Memorial Lanes, a nearby bar and restaurant, for a steak dinner.

We are grateful to have such a hardworking group of employees that share our core values. As a family owned and operated business, we enjoy gathering our employees and their families for some fun. We look forward to making the Kafka Granite vs. Kafka Conveyors Employee Golf Scramble an annual event.

Contact us for more information, to request a quote, or to receive free samples.